Note: This is provided by the Linda Andersen, with the Galva Historical Museum. 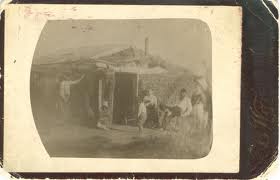 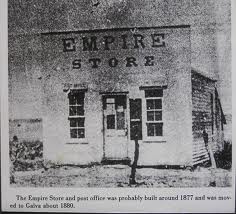 Old Empire was a wonderful place, over 80 years ago.  Everyone was so sorry when the railroad came through, and the town was moved, two miles north and one west, then one half north, to the railroad, and the name was changed to Galva.  The name Old Empire, though, still remains to that corner of Sections 35 and 34 of Empire Township and the opposite ones in Lone Tree Township.  The town was in each township and also on both sides of Turkey Creek, which was never known to run dry in this locality.  The school house was built on the west side of the section line running north and south and on the south side of the road going east and west.  The school district was over four miles square.  This building was also used as the church.  It was a Christian Church, although among the attendance there were Methodists and Presbyterians and one Catholic family, the McVays.  Some came from many miles away as it was the first church in the community.

The Lowrey's came to the community in 1870, from Findlay, Ohio.  They lived with Adam Dielman's family until they could build their house.  Cornelius Drum and Mr. Meek also came in 1870.  Mr. Meek lived with Mr. Drum until he built his own house.  Perhaps others came that year as many had homesteads.  J. J. Colby was the first Postmaster.  He homesteaded the quarter on which the school house was later built.  He also gave the SE corner of his quarter for a cemetery, which is called Empire Cemetery, although located in Lone Tree Township.  Mr. Colby was also the first Sheriff.  The first grave in Empire Cemetery was for a Mr. Sauer who was frozen so badly when lost in a blizzard that he lived only a month afterwards.  He had been out with a yoke of oxen and was found by the Middleswart boys, about a mile and a half south of his home which was just north of Old Empire school house.  Another early grave was that of two young brothers buried together.  They were killed when the roof of their house fell in and smothered them.

Mr. Haskins was the first Dr. and druggist.  Mr. Drew was the first blacksmith.  Sound carried far in those days, and you could hear him shoeing horses every day.  S. B. Turner had a drygoods and grocery store, hauling his goods from Newton, Kansas, by team.  Mr. Meek was the first teacher; his wife also taught, and also their daughter, Fay.  Fay later married Arthur Finkle, and was married in the same school house where she had taught school.  The first preacher in this school house, which was also used as a church, was a Rev. Servy who had a blind wife.  Everyone loved them and called her, "Dear old blind Mary."

Turkey Creek was used for baptising, at a deeper place on the Dielman farm.  At one baptismal service, Joseph Finkle started the old hymn, "Pull for the shore, brother."

S. P. Lowrey was Justice of the Peace.  E. D. Minton was another early teacher.  There was a mill, run by steam, on Turkey Creek, owned by a Studebaker or Brubaker, who ground corn.  This locality being on the Santa Fe Trail, many soldiers camped here.  Also others going farther west, so a stockade was built out of cottonwood logs for the animals.  Later this stockade was dug up and the logs used for buildings.  Besides the store mentioned before, George Foster had a store, together with a Mr. Fairhurst.  Dr. George had an office above the store and Mrs. Doyle had the Post Office in the store.  She was also Galva's first Postmaster in 1879 when the town was moved to the railroad.

Among others in and around Old Empire, not mentioned before, were the following names:  BURTON, HUNGERFORD, BARNES, CRAMER, MORSE, SOCKWELL, COLLIVER, TINSLEY, LEWIS, PACK, GATEKA, BUNNELL, RITZ, MUN, CORNWELL and many others.  Jim Wilson taught music every winter.  Zack Drew was the first photographer in McPherson.  Sherman Lowery was a great literary man, finally going to Pittsburg, Pa. where he taught in the school for many years.  One joke about Sherman, he said if he ever married, she would have to be a good one.  And he did marry a lady named Goodman who lived near McPherson.

Mr. Drew's son married Mary "Mollie" Lowery.  He died before they were married a year, so she was wife, mother, and a widow within a year, and although young, never married again, but lived with and helped her mother.  Mrs. Lowery raised lots of cucumbers which did well on the sod.  She put them in barrels of salt water every fall.  When she had all she wanted, she let the neighbors pick the rest.  These neighbors came on horseback for their cucumbers.  Much wheat and watermelons were also raised, but one year, the grasshoppers came.  The settlers shocked their corn and tried to save it, but the grasshoppers ate the shocks also.  This ravage brought on hard times and relatives and others in the east sent boxes of food to help out.  One family received some ham and dried apples.  One young man liked dried apples, so he filled his pockets and back of his coat with them and all day while in the field working, ate dried apples and drank water.  Naturally they had to have the Doctor for him and it was several hours before he got relief.  Of course there were lots of hard times and troubles but lots of fun, too.  The church was the center of the Sunday school and of social activities.  The people were friendly and humorous.  They were pioneers, brave enough to try a new country.  The Sunday school got a prize at a picnic one day.  It was at what they called Lay's Grove.  On a Saturday afternoon on the way there, the group passed a man plowing, with a walking plow, of course.  They all began to sing, "Hold on, hold on, my brother, hold on, hold on until the prize is won, hold on to the plow and worry not now, for the work is almost done."  The man plowing waved and smiled at them.

For fuel, the settlers gathered cow chips, and if a rain was coming, hurried to get them someplace in a shelter.  Some burned cornstalks and even corn.  Some prospected for coal.  Loren Cramer and Nat Colby worked to sink a hole over 100 feet deep.  They  used a wooden tub to sink men and lift dirt, using oxen for power.  Only a small trace of coal was found.  Many years later, a large oilfield was developed starting one half mile east.

These early settlers were bothered with horse thieves, so they formed an Association called the Anti-Horse Thief Association.  If a thief was caught, he was tarred and feathered and rode out of the community on a rail.  This was a secret organization and the names of members were not known.  Needless to say, not many horse thieves were around after the order was formed.

There was always the danger of prairie fires; also many hard blizzards.  Once one man had two two-year-old colts on a picket pin.  A terrible snow storm came and the colts were so frightened that they ran and ran around those pins.  The man had to go out in the storm and get the animals into a shed.  His mother had left clothes on the line to freeze and bleach.  The wind blew the clothes and line away.  In the spring, she found her "shimmy" in Wilson's yard over a mile away.  This caused some laughter.  Once, the house of a family was struck by lightning.  It came down the stove pipe, lifted the stove up, set it down again, and broke all the legs.  The old man raised up in bed and said, "What the devil's up."  He was shocked and had to stay in bed all the next day.  The mother had saved some flower seeds and garden seeds in a lot of small bottles, having no storage place, she stored them in the rafters.  The bottles all fell and broke, the seeds were scattered everyplace.  They fell on a little girl who was sleeping on the floor.

Many other interesting stories might be told of those early days for there were many hardships and much sadness, but many humorous happenings and pleasures and the neighborliness was grand.  In case of a death, the neighbors assisted and probably hauled the corpse in either a spring wagon or a wagon behind horses.  If a roof was to be raised, the neighbors helped.  In sickness, neighbors sat up with the ill.  Neighbors donated food and clothing for those who were poor.

The following was sent from the Postal Dept., Washington, D. C. to Jessie Cramer.  It was sent by her to Edna Myers and she in turn gave it to the Galva Post Office to keep with other papers.

Post Office of Empire, McPherson County, Kansas, was established
October 7, 1872, with Joseph J. Colby as the first Postmaster.  Name of the office was changed to Lone Tree on August 10, 1880.  The Lone Tree Post Office was discontinued May 9, 1888.

The Post Office of Galva, Kansas, was officially established October 1, 1879,  with Alexander G. Robb as first Postmaster.
Posted by Anonymous at 8:06 AM